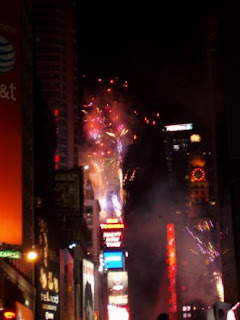 We decided that since we would be in New York City for New Years Eve, we needed to spend the evening in Times Square. Of course, most people think about standing in the cold for several hours with a bunch of strangers and cringe...we thought about that, but more importantly we thought about the extreme lack of toilet facilities available to those who are trying to "enjoy" the evening. My solution? Adult diapers. Telling you this might be sharing too much, but you may as well know. Jason & I went to Target and bought a pack of Serenity brand adult diapers for us and our 4 friends (who I won't name, but are pictured here) to wear so that we could have peace of mind during our 7-hour marathon of standing in the cold. The evening itself did drag a bit...I don't think I've stood for 7 hours, ever. But, with good friends, the time did pass, we even bought a pizza which was deliver 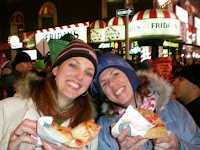 ed to us in the human corral that we were confined to for the evening. And, since I know you are probably wondering, none of us actually used the diapers we were wearing, although Jason had tested one to ensure it's reliability before we embarked on our evening adventure! All-in-all, we're really glad that we did New Year's Eve in Times Square, but we're equally as glad that we won't ever feel the need to have to do it again! 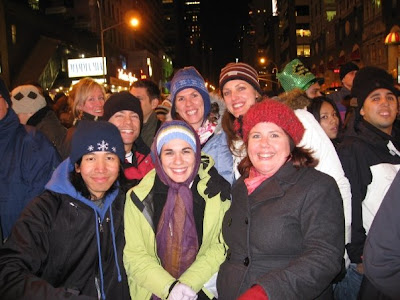