Jason in a fight?? 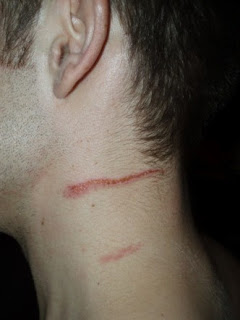 When Jason met me at the subway station tonight to walk me home, I could tell something wasn't quite right...when I asked, he tilted his head so that I could see a large bandage on his neck and commented that it had been an interesting day. When I pumped him for a little more information, he told me that two of his female students had gotten into a fight outside his classroom and without a second thought, he'd jumped in-between them to break it up. Unfortunately, they were still fighting and his neck sustained a 2-3 inch jagged cut (from one of the girls fingernails). Ouch!!
Posted by 2Schlafs