Ever since we arrived in Palau, I have been intrigued with the cultural custom of chewing Betel Nut. I must admit, I’ve also been pretty disgusted with the visible consequences to those that chew regularly. Many people here have significant dental damage, orange & black teeth, receding gums, numerous teeth broken or missing. I’ve found myself wondering why in the world anyone would do this to themselves, while at the same time seeing how it is simply part of the culture in which we are living.

For those of you who don’t know what Betel Nut is … it is the seed/nut of a type of palm tree. Once taken from the tree, the nut is split in half (usually by biting on it, but some Palauans carry a small knife with them in their Betel Nut bag). Once split, a white powder is poured inside (the white powder is made from clam shells that have been burned and then turned to powder). Some people add a piece of a cigarette also. Then, either half of the nut or the whole nut (depending on your mouth size) is rolled up in a leaf and put into the mouth for chewing. All the saliva/juice from chewing this is spit out … on the ground or into any old water bottle or soda can. The spit is a bright orange color (I’m told the leaves give it this color). I have to admit that some of the ladies here have pretty impressive spitting abilities!!

I’ve known that I would not be able to leave here without at least trying it once to see what it was really like … this past Sunday was apparently the day. Here are the photos of my first Betel Nut chew (thanks Sarah for being a great photographer of this moment!) 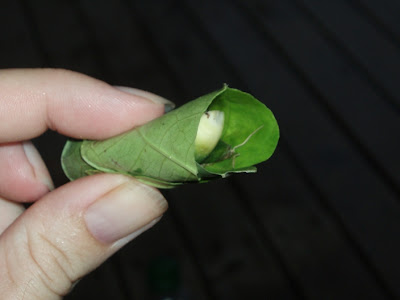 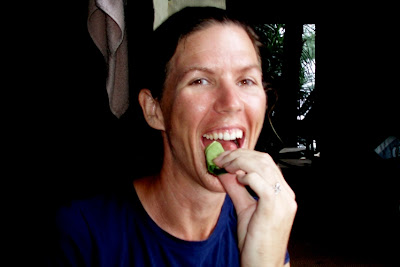 I LOVE Secu's expression in this picture! 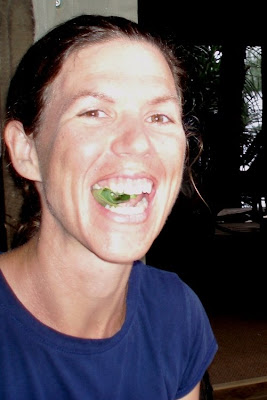 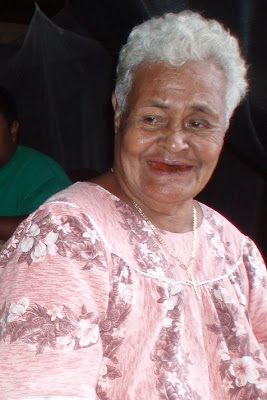 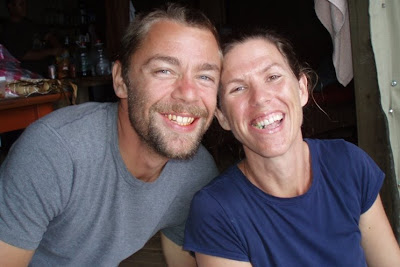 So the initial few chews are a little tough, but after that, it’s pretty easy to chew. I chewed it for maybe 15 minutes or so – spitting every 3 – 4 minutes. It made me feel kind of dizzy and hot for several minutes and gave me heart palpitations for several hours afterwards (this part makes me a little hesitant to chew very often). We’ve also learned that if you rinse your mouth with water afterwards, your teeth don’t end up nearly as stained, so I was pretty diligent in that area!

Way to experience it "all" my friend! You look lovely in these pics by the way, you are totally glowing! :)