Jason got a called in last night to work on his first official forest fire. Something he's been hoping to do since getting certified at the beginning of summer. He reported in early this morning and they've told him he may be on-duty for anywhere from 2 - 14 days. It was a really, really cool thing to see how excited he was to be going to "work." It was almost as if he was a kid again and it was the night before going to summer camp.

I am thrilled for him to have the opportunity, but slightly less excited at the prospect of a somewhat undefined period of time apart...ironically, the story & craft theme at the library just yesterday was fire engines :) Each child got a fire hat and created an edible fire engine. 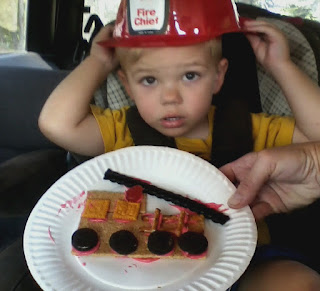