Today is day 10 of Jason being away ... I already knew I wasn't cut out to be a wildfire fighter's wife and while Luke & I have done fine, we are definitely ready for him to be home. One of Jason's trainers had told their group that the divorce rate for firefighters was over 70%. No thank you. We're glad that Jason declined to re-up which would have meant having only 2 days off and then another 14 days out if needed.

I have been really thankful for the community here at Priest Lake as there are lots of other wives with young kids who also have husbands away fighting fires -- some for the majority of the summer -- and they have made a point of including me in their activities which helps so so much.

Jason's parents were able to go visit him at the fire base camp and sent me this photo -- notice they even have t-shirts for the fire (not sure how the people who lost their homes would feel about that, but it's nice for the 400+ people who've been working 16 hour days to have something to remember it by I suppose).

He's set to be home tomorrow by dinnertime -- woo-hoo! 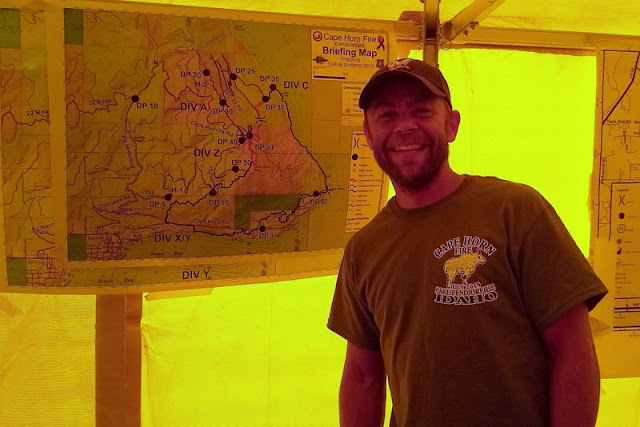