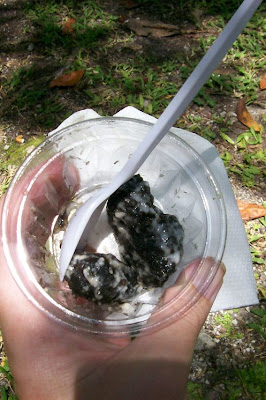 The elementary school students had their promotion day a few weeks ago with a potluck afterwards for those who had attended. While I was loading up my plate (& secretly wondering if any Palauans would actually eat any of the food I brought) ... one of the local ladies added this to my plate saying "try this!" This has happened to me at nearly every community potluck. Often I end up with things on my plate that I already have tried and wouldn't really care to be eating again. This though was a first for me.
We were later told by one of our friends that it is "Palau's Number One Dessert!" And, we found out what exactly it was ... even after tasting it, I had no idea! It is made from the tapioca root and sounded really intensive to make. The root has to be bbq'ed several times, then ground up and cooked again in coconut milk. It didn't taste too bad. Just different. Sort of flavored like licorice? I'm not really sure how to describe it well ... just thought I'd share one of the many interesting things we get to eat here :)
Posted by Carrie