Wednesday, the Palauan phase of our honeymoon officially came to an end. We arrived into LAX at 4:30 in the morning and have been relishing using flushing toilets, showers with hot, running water, electricity, having an internet connection and so much more. What bliss!

It was really hard to leave Palau behind. We absolutely loved our home there and the people became very special to us. We feel SO blessed that we were able to spend the past 10 1/2 months there. In a way it has given us closure to the Peace Corps experience that we set out on 3 years ago. We feel like we've been given an incredible opportunity to have a re-do of the experience we cut short to get married, and we have to admit living on Angaur was everything I think we'd hoped for from our original Peace Corps experience.

Here's a photo of us as we cruised away from Angaur Tuesday morning. 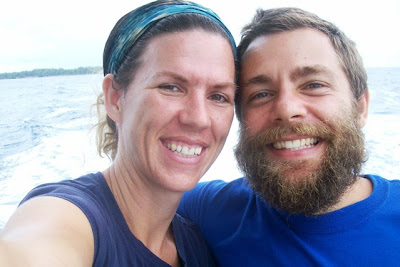 Some of the things we'll miss about Palau:
- Feeling like we lived at the edge of the world (we sort of did!)
- Being part of a community, knowing everyone
- The tropical, lush, greenery that is everywhere
- The eyebrows (they flick theirs constantly to communicate)
- The complete lack of media, what a wonderful thing to be absent from the constant onslaught
- The spitting (Palauans spit their Betel Nut all the time and have amazing spitting abilities)
- The lack of mirrors and the body image obsession they bring with them (what a relief it has been to live in a place where I was genuinely confident in myself, knowing that it didn't matter how I looked or what I was wearing, no one cared about things like that)
- Accepting a ride from any random stranger without hesitation or fear
- Living in a place where people take care of each other without blinking, it is just what they do

A few things we've been looking forward to:
- Seeing family & friends and being able to community easily
- A comfortable bed (the one at our house was really uncomfortable) & not having to sleep under a mosquito net
- All the ammenities...running water, hot water, water that doesn't have to be boiled to drink, electricity, internet, phone connections, nearby laundry facilities
- And lastly, not having to check for boats passing nearby before taking a shower!

A couple things we learned:
- We CAN live without having ice cream on a daily/weekly basis - I think we only got to eat it when we went into the capital
- Sports DO go on even if Jason isn't watching them
- Living simply has some incredible perks (no bills being a BIG one!)

There are many, many more things we could add to our lists, but I won't bore you!

Email ThisBlogThis!Share to TwitterShare to FacebookShare to Pinterest
Labels: Palau

Can't wait to continue to live vicariously through your travels. China will be a fun blog to read.

Are you guys going to be in LA at all before heading to China? Amy and I would love to see you. I have your SBC email in my address book, but not the new one. You can email me at my Unum address or my others as they have not changed.
Mike

Yay! Excited to read (and see pictures) of your next adventure...When do you head to China??

I'm so proud of you guys, I think you're truly amazing and I loved reading this post! Have a great time at home enjoying the "ammenities" before heading off on your next adventure!!