Jason and I are fond of a verse from Proverbs which says something like 'in our hearts we make our plans, but the Lord directs our steps.' It is a good reminder to us that God is in control and that when things aren't going how we planned it may just mean that God is involved in our life, directing our steps.  Having God involved in our lives is ultimately a pretty awesome thing.

We had a very poignant reminder of this yesterday afternoon ...

We moved into our very cozy studio late Sunday afternoon and while Jason was at school yesterday, I worked on unpacking and finding a niche for all of our things.  I had been processing how my life has been all about downsizing ever since I joined Peace Corps seven years ago.  I feel like we are in a somewhat perpetual state of trying to trim down our belongings.  And while it is often difficult to let go of my possessions, I tend to actually feel better once I have done so.  I felt a sense of pride at being able to fit all of my clothes into two small drawers in our apartment's wardrobe...

Later on, in the midst of our usual afternoon rain storm there was a ferocious pounding on my door and a man yelling in Spanish, the only words I gathered were "here" and "now" -- at the same moment, I realized the lovely stream which ran right past our apartment building in a channel about 10 feet below the building had turned into a huge, angry mess and was flooding up over the edge of our balcony.  I yelled back to the man in English, "I need to go now!!??" and he confirmed, "Yes! Get out of here NOW!"

Then the adrenaline hit.  Luke was napping in his car seat, so I got him unstrapped and into a carrier pack; then in a panic looked around at what else I should grab -- diapers, a fleece coverall for Luke, an umbrella, computer, camera & phone. All haphazardly shoved into a backpack and Trader Joe's bag that still had unpacked groceries in it (no, there is not actually a trader joe's here).  None of our other stuff mattered.  In my panic, I could not locate my keys and just left the door ajar so that if the place didn't wash away, I could get back in.  As soon as I exited the building, I realized we were really in trouble. The road had become a river.  There was so much water coming from what is usually a beautiful waterfall that it was splitting around our building, pushing large boulders, hunks of asphalt and some small cars down the road.

Seeing me wading into the water with Luke and my bags, the man who had alerted me came back for me stating he hadn't known I had a baby. He took my bags and then helped me across the road/river to higher ground, passing me off to some friends who then helped me to a safer area which was covered from the rain.  I am so thankful to this man that I had never met before, but who took the time to help us.

Once I felt like we were in a relatively safe place, I contacted Jason at school -- pulling him out of an after-school tutoring session -- even though I knew there was nothing he could do, I just needed to talk to him and of course that's when the reality of what had happened really hit me.  I'm standing under an awning with about 15 Guatemalan men and two Spanish girls watching our plans get pushed down the road by a crazy amount of water.

We have no idea why something like this would happen less than 24 hours after moving into our new place -- we had felt very confidently that God had provided this place for us and this is where he was leading us to live.  We still had a few days left at our original apartment, but it had seemed like a good idea to move over the weekend when Jason was off work.  So much for good ideas :)

Jason's school administrator and co-workers have been incredibly supportive and we feel so blessed by all of them ... once the water's had receded one of them drove Jason to our place so he could come get me & Luke, then took us to the administrator's house while we figured out what we should do. We were invited by many people to come stay with them, but as we still had a few days left on our original apartment, we've come back here for now.  Other co-workers graciously hosted us for dinner last night since we had no food and lent us towels so I could get cleaned up after my impromptu river walk.  Accepting the help of others is always so completely humbling and we know it is good for us even though it is hard to accept.

Once things settled down a little bit, the girls who were helping me & Luke started taking pictures and so I figured I should take a few also ...

The usual state of the waterfall ... it is fed higher up by a larger waterfall, but still, it looks pretty docile, right? 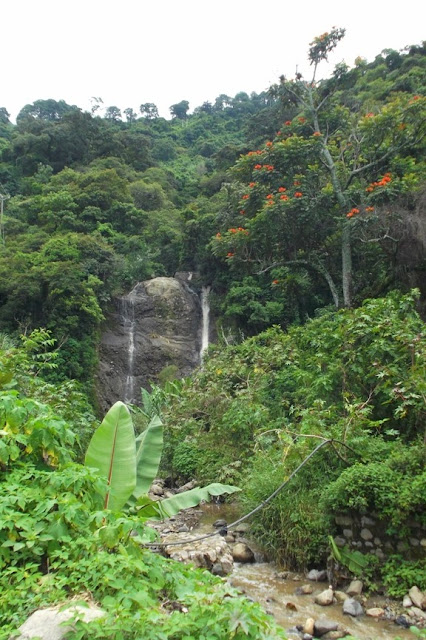 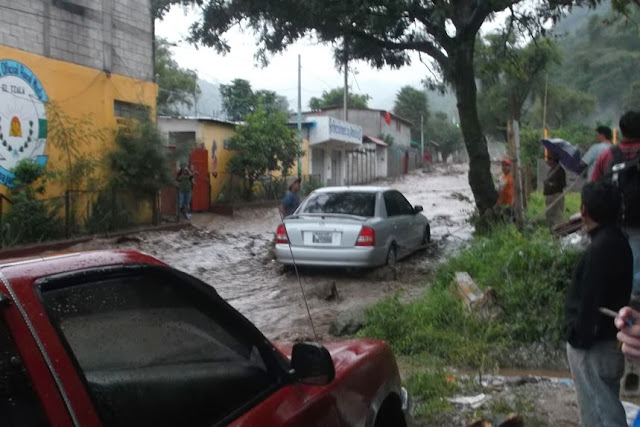 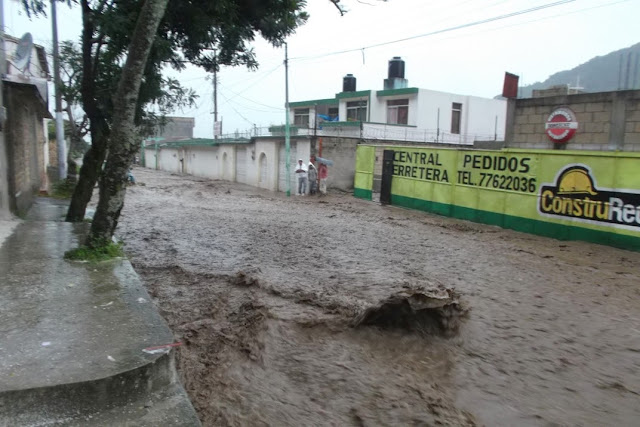 Exuberantly happy to think we are safe --- (and perhaps a good advertisement for Baby Bjorn carriers, "getting you & your baby through floods") 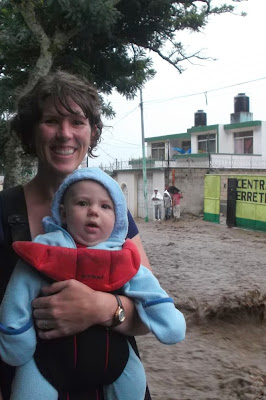 The aftermath at our apartment building -- the water flooded our balconies, but since our apartment was up another few inches it did not actually flood inside. 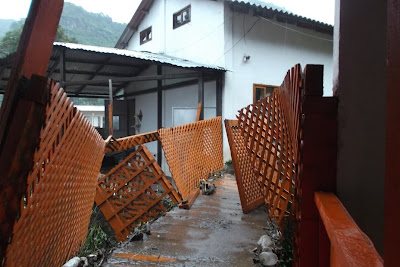 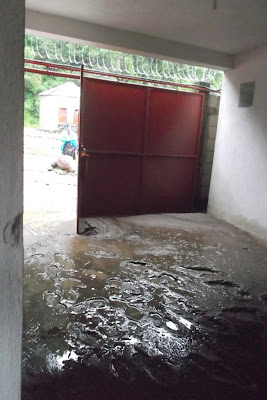 We would appreciate your prayers ... we assume the building made it through the night, but we don't know if it's structurally sound now and even if it is, if we'll feel safe living there.  We still have about two months of rainy season left.  Please pray that God's direction will be clear for us.
Posted by Carrie

Praying for you guys!!!

Oh wow! I will be praying for your family and for God's clear direction!!! He is faithful, even when things don't make sense..