Last month, Jason borrowed a small spear gun from one of our friends here and we spent the afternoon chasing down fish in our harbor. (The harbor is a relatively safe place to learn how to spear fish as sharks don't often enter in) Jason had a lot of fun spearing fish, but most of them were able to wriggle off of the spear before he could get to it and capture them.

Just before we were about to quit, Jason spotted this puffer fish (it wasn't all puffed out until after he'd speared it). When he got it up to the surface, it just started growing & growing and it was oozing clear goop. It was sooo funny! Our Peace Corps friend, Sarah, was nearby to take a few photos of Jason's big catch! 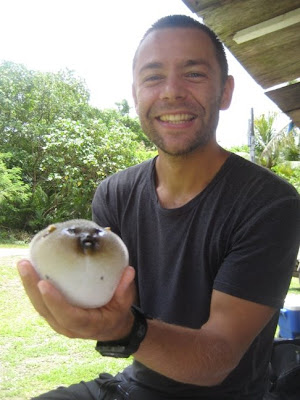 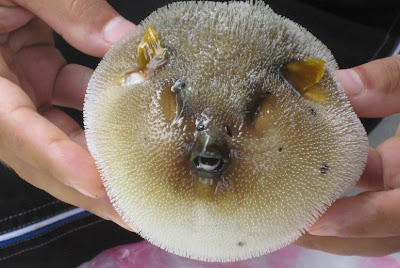